Shanika Puckett has taken six breaks during her nearly 20-year career as a graphic designer.

Most were for a few months, like after the birth of her daughter or after an infection put her in a medically induced coma and she had to relearn how to walk. One break, after she left a job she was unhappy with and then searched for a new one, lasted a year.

Puckett is currently working on a contract basis and is looking for a full-time job. During job interviews, she said it’s almost inevitable that recruiters will ask her about the gaps on her resume.

“This is real life, things happen … there are life events that you have to process,” said Puckett, who lives in the Atlanta area. “As I get further in my career … I feel like I [shouldn’t have to] keep explaining and re-explaining it…I have experience, I have portfolios, I have recommendations and references. Why do we get hung up on these minor details?”

Career gaps on resumes have long been seen as red flags to some recruiters and hiring managers. Sometimes there is a concern that the time away leaves the candidate with technological gaps or a need for more time to acclimate back into their role, or there’s a fear that they aren’t serious about returning, explained Carol Fishman Cohen, CEO and co-founder of iRelaunch, which helps companies launch and expand programs that help employees return to the workforce.

“Historically, there were some really conscious bias around career gaps, some of it warranted, some if it not, ” said Jeramy Kaiman, head of LHH Recruitment Solutions, West at the Adecco Group.

But with millions of Americans dropping out of the workforce during the pandemic for a range of reasons — they lost their job, needed to care for a family member, had childcare and remote learning responsibilities, sought a career change or decided to retire early — attitudes about gaps on a resume have begun to shift.

“The pandemic has definitely lessened the stigma around career breaks,” said Fishman Cohen. “[They’re] more common now and recruiters and hiring managers are getting used to seeing them on resumes.”

Now, many of the workers who took a break during the pandemic are starting to re-enter the workforce, according to Kaiman. “Because it was such a high volume of people who chose to stay home for a variety of reasons and the labor market is so tight, those things factored in together made it that employers are much more flexible now about their ‘red flags’ toward longer career gaps.”

In fact, LinkedIn launched a new feature Tuesday that gives users the option of adding “career breaks” to the experience section of their profile. Users can enter dates and choose a reason for the gap, including caregiving, bereavement, career transition, layoff, health and well-being, travel and volunteer work. They can also include additional details on how they spent the time.

“It allows you to openly embrace the time you took away from work on your profile and show how these life experiences … apply to prospective jobs,” said Camilla Han-He, senior product manager, profile and identity products at LinkedIn. 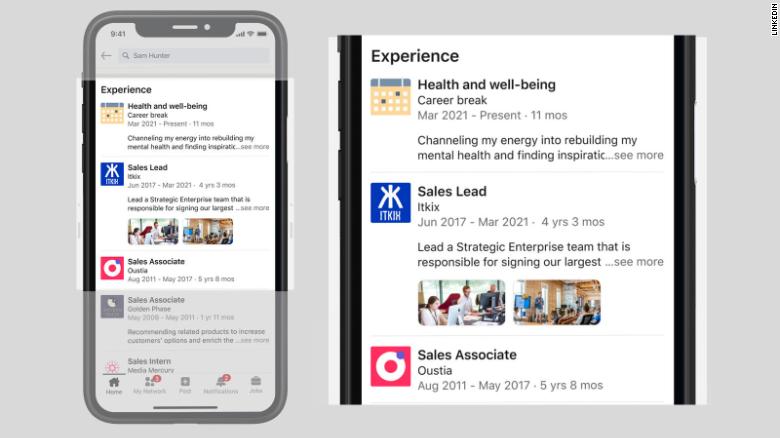 LinkedIn’s new “career breaks” feature allows users to add details about their time out of the workforce.

She added the more people share their career breaks, the more it will help normalize them.

“By giving people a recognized way to proudly display their career breaks in their profile, we are letting the world know that taking a career break is professional,” Han-He said.

While Kaiman thinks the shift in attitude toward career gaps is here to stay, he said applicants who have career gaps and have changed jobs frequently might still give employers pause.

“When they have career gaps coupled with a lot of job mobility, I think that is a red flag employers are still going to have some concerns about.”

How to address the gap

If a potential employer asks about a career break, Fishman Cohen said the key is to acknowledge the break and focus on why you are the best candidate for the job. She suggested bringing up anecdotes from previous work or volunteer experiences that showcase your skills.

She also suggested keeping the focus away from the lapse between jobs during interviews.

For job seekers who have been looking a while, Kaiman suggested focusing on the things you’ve been doing during the gap, like new skills training or any relevant experiences that make you a strong candidate, and how you are being selective about your next opportunity.

“Discuss the reasons you were searching for the right job versus discussing the inability to find a job,” he said. “That makes you look more confident in the reason for the longer unemployed gap.”